ExcludedUK statement in response to the end of CJRS and SEISS, with stark statistics from latest ExcludedUK survey 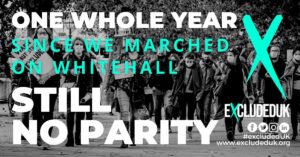 This now signals a new phase that we are entering, where businesses and individuals alike will feel the longer-term impacts of the pandemic. Uncertainty looms large as these financial safety nets are removed – both for employees facing possible redundancy and businesses facing liquidation – and these were the lucky ones who actually still survive amid the pandemic

ExcludedUK is deeply concerned for those for whom no such financial safety net was provided. The Treasury had over 18 months to work out a solution for +3 million UK taxpayers entirely or largely excluded from the schemes. These exclusions cannot be mere oversight on the Treasury’s part, but rather they appear to be active and arbitrary policy decisions.

Parity in support has been the overriding call from the ExcludedUK, but despite a whole range of proposals put to the Treasury, nothing has been provided.

According to the latest survey conducted by ExcludedUK:

In the last 12 months, of the respondents to our survey:

This survey was conducted between 28 August and 9 September with 2,097 respondents.

Repairing the damage of 18 months of no meaningful government support is a pressing challenge and if the Government thinks this issue is going away, they need to take note that for many the hardest times are yet to come.

ExcludedUK fails to understand how the Chancellor can boast about the revenue to be generated by increasing dividend taxation by 1.25 percentage points, having previously claimed that calculations involving income from share dividends were ‘too difficult’ to work out.

The oft-bemoaned complexity of such calculations when COVID-19 financial support schemes were first being discussed was just an excuse.

The repeated insinuation that any scheme proposed to cater for Limited company directors was vulnerable to fraud is unfounded and incredibly damaging.

Prior to Covid-19, less than 19% of our survey respondents had ever accessed benefits before. They were self-sufficient, although not high earners in the main; beauticians, dog-walkers, charity workers, art and music teachers, arts and theatre professionals, film and TV professionals, plumbers, electricians and construction workers. People who are the backbone of the UK economy, who continue to face financial hardship and mounting debt.