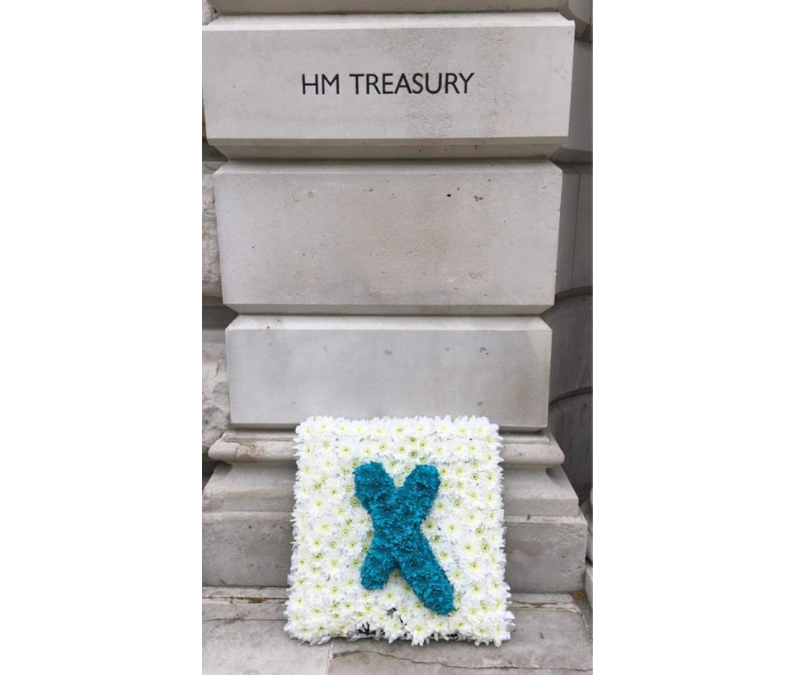 PRESS RELEASE
14 May 2021
ExcludedUK pays tribute to the lost lives and livelihoods due to being excluded from government Covid-19 financial support by laying an X-shaped wreath at the steps of the Treasury, on the day of the organisation’s one year anniversary
ExcludedUK was founded one year ago today, on 14 May 2020, in response to the financial challenges faced by individuals and businesses entirely or largely excluded from the government support schemes. Little did we expect back then to be still here one year on.
This anniversary is a grim reminder of how long so many have been struggling to survive without meaningful financial support during the pandemic.
Two members of the ExcludedUK team laid an X-shaped wreath in the shape and colours of the ExcludedUK logo in remembrance of those who have so sadly been driven to taking their own lives as a result of the severe hardship inflicted on them having received little to no support through no fault of their own.
On the same day, ExcludedUK is sending an open letter to the Treasury, signed by numerous MPs, leading figures including Gina Miller, a whole host of unions and industry bodies, and many individuals, calling for the Treasury to rectify this injustice once and for all.
This open letter is a reply to a wholly unsatisfactory response from the Rt Hon Jesse Norman MP, merely reiterating many of the same assertions we have heard time and again from the Government, reminding us of the help that has been given, while failing to address how the gaps in the Covid-19 support schemes could be fixed so as not to leave over 3 million out in the cold.
ExcludedUK maintains that the severe hardship faced by affected individuals and businesses is only set to become more acute as time passes and the issue is not going away.